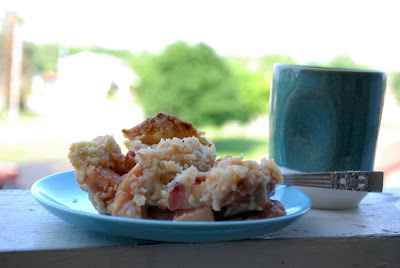 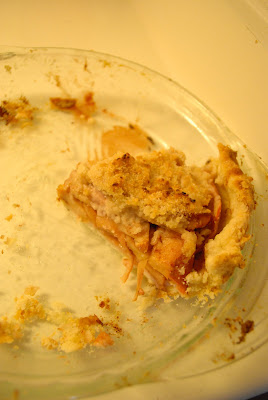 We made an apple pie the other night, and a day and a half later, this was all that was left. Between the two of us, we ate 7/8 of a pie in a day and a half. It was that good. 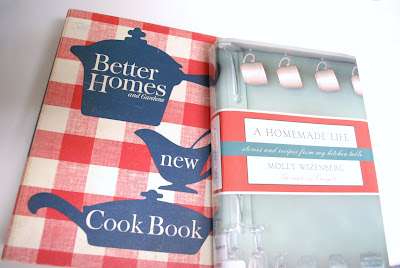 It was very good. The apples were good, the crumb topping was good, but the crust was very good. I have never made a crust that tasted that good. I found the recipe for the crust in A Homemade Life (a memoir/cookbook that I've been reading. The memoir part is okay, but the recipes are wonderful) and the pie recipe was from the Better Homes and Gardens New Cookbook (1965 edition).So, here are the recipes, edited slightly.

In a small bowl or measuring cup, combine the water and vinegar.
Combine the flour, sugar and salt in a bowl. Cut the butter into the flour until it resembles coarse crumbs; there should be no pieces bigger than a pea.
Sprinkle the water mixture over the flour mixture, stirring just until moist clumps form. If you pick up a handful of the dough and squeeze it in your fist, it should hold together. If the dough seems a bit dry, add more ice water by the teaspoon.
Turn the dough out onto a wooden board or a clean countertop, and gather it, massaging and pressing, until it just holds together.
(At this point the recipe says to form it into a disk, wrap in plastic wrap and refrigerate it for two hours, but I just went ahead and rolled it out)

And that's it! John cut the apples while I mixed the crust, and between the two of us we had the pie in the oven in 20 minutes.
It was so very good. Maybe it was all the butter.
So glad that John had the idea.

Oh. We also made brownies to go with the pie.

yes, it must have been all that butter-I haven't quite mastered an all butter crust, but I'm in full pursuit; I'll try this one for John's birthday rhubarb pie next month. And of course, pie is the best for breakfast-I think! blessings, Lizzie