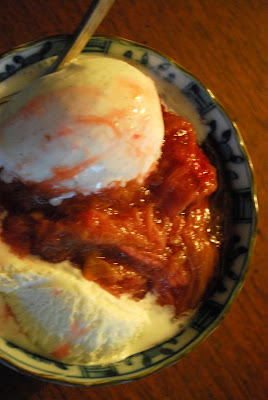 I found a recipe for baked/stewed rhubarb over on Orangette a few months ago and the other night I made it.
It's delicious. And refreshing. And addicting.
Oh yum.

It's also pretty simple to make, which is a really nice feature right now!

Roasted Rhubarb
2 lb. rhubarb, trimmed and cut into 3-inch lengths
½ cup sugar
½ cup crisp white wine
1 vanilla bean, split (I used about 1/2 tsp of liquid vanilla that I added about 5 minutes before it was done)

Set a rack in the lower third of the oven, and preheat the oven to 350°F.
Put the rhubarb in a Dutch oven or other deep oven-safe pot. Add the sugar, wine, and vanilla bean, and stir to mix. Bake (uncovered) for about 30 minutes, or until very tender, giving the pot a gentle stir about midway through to ensure that the rhubarb cooks evenly.

I picked up rhubarb yesterday at the Farmers Market!