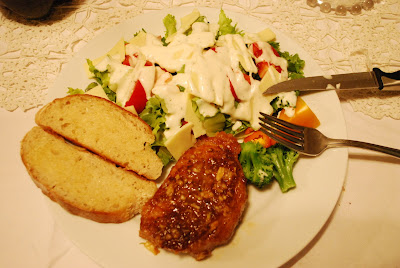 I found a recipe a few days ago for a pork tenderloin that looked really good.

Normally I steer away from pork recipes because I'm not that fond of pork, but recently we have been buying it because it's cheap (and cheap is good). We buy tenderloins (quite a sizable portion of meat!) at Sam's Club and John cuts them down into chops (much more our size) and freezes them in packs of three or four. It ends up being an economical way to get good protein in our diets, and allows us to experiment with recipes we might not otherwise try, not wanting to ruin a large piece of meat. 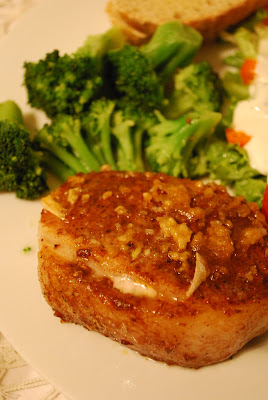 I found this recipe on the blog "Annie's Eats" (which has some very good recipes and nice pictures of those recipes ... makes your mouth water :)) and the only modification that John made when he cooked it was that he used pork chops instead of a tenderloin. It was so delicious!!! As Annie mention in her post, it is an odd combination of spices, but it works well. Really well!!!

2 pork tenderloins (about 2-2½ lbs. total) - we used 4 pork chops instead and had some of the rub left over
2 tbsp. olive oil

Directions:
Preheat the oven to 350˚ F. Combine the salt, pepper, cumin, chili powder and cinnamon in a small bowl. Stir together with a fork to blend. Pat the mixture over the pork tenderloins.

Heat the olive oil in an ovenproof 12-inch skillet over medium-high heat. Place the tenderloins in the skillet and brown on all sides, turning occasionally, about 4 minutes total. Remove from the heat, leaving the pork in the skillet.

Stir together the brown sugar, garlic and Tabasco in a small bowl until blended. Spread the mixture evenly over the tops of the tenderloins.

Place the skillet in the preheated oven and roast about 20 minutes, until an instant-read thermometer inserted in the center of each tenderloin registers 140˚ F. Loosely tent the skillet with foil and let stand 10 minutes before slicing and serving.
Posted by Elizabeth {the Path Less Traveled} at 3/24/2010 09:54:00 AM